The Grateful Dead T-shirt isn’t just a piece of well-worn psychedelic memorabilia: for many, it’s a full-out obsession. Just take former Grateful Dead sound engineer Dan Healy, whose archive of several hundred Dead T-shirts and more tie-dye pieces from the band’s history is a veritable treasure trove. It’s a resource Maggie Rogers tapped into with her recent Lollapalooza look, where the singer took the stage in a tie-dye set that Healy’s wife made for him in the late ’60s.

Now, Rosalía is putting her own pop star twist on Deadhead merch—the Catalan singer-songwriter took to the streets of Philadelphia in a sunny oversize graphic Dead tee, combining some relatively restrained tie-dye along the shoulders with bright sunflowers (and of course, there’s the band’s name in some groovy lettering on top). She paired the standout T-shirt with bright orange track pants and a pair of tie-dye socks, naturally. Rosalía might have the bubblegum princess pop star look down pat, but she’s now proved she’s just as capable of turning a look that would catch just about anyone’s eye at a Dead and Company show, too. 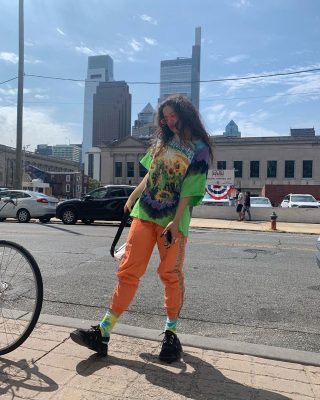 View all posts by alex@beaut-shirt.com